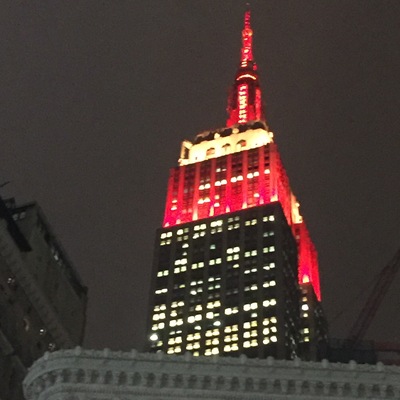 Kataib Hezbollah is warning Iraqi security forces to move away from American bases.

That's not a problem for us, but if the Iraqis vote to expel us, it's likely that the militia won't attack.

So the end result of all of this is Iraq out from under Iran, the US out of Iraq, and the region seeing Trump as fearless.

AND AGAIN, the Democrats will be forced to oppose the troop withdrawal.

They may impeach Trump again.

Look in the crowd - It's "Ben Carson, Kanye West, and that black Sheriff with the hat."
(I also see some Jeniffer Lopez's)

I know you're angry about Melania being disrespected, but she set up those little dorks.

First of all, @FedEx, never get a robot to do a New Yorker’s job. We have the finest workers in the world.

Second of all, we didn’t grant permission for these to clog up our streets. If we see ANY of these bots we’ll send them packing.

However, these guys are still OK...

As someone who lived in NYC during the entirety of Mike "Brewster's Millions" Bloomberg's Mayoral run, I want to remind people that he ran on term limits, and enacted a 2 term limit for NYC Mayor - until his second term was winding down, at which point he decided term limits were actually a bad idea and eliminated them giving himself a 3rd term.

IMO, he was a very good mayor, until the above. His 3rd term was not so good, including insisting on holding the marathon the week after Sandy

Trump is a touchstone.

If you can perceive him as he is, it means that you're seeing reality clearly.

"My father says almost the whole world is asleep. Everybody you know, everybody you see, everybody you talk to. He says only a few people are awake, and they live in a state of constant total amazement."

--Joe Versus the Volcano

Good morning American tax payers!
Thank you for funding our swampeachment, and most of all, last nights post-impeachment after party. What a blast!
Best,
Dems

Gotta love that “Lt Col”. I’m sure that came off well

I say YOU have done that, so let’s agree to disagree, Mr. Enemy

Also, water was accused of being wet

A bunch of hate filled, ivory tower living, lie spewing b*tches sitting around for days repeating their smears and reminding everyone how moral they are.

if it wasn't for smear jobs, the corrupt dems and the corrupt media would have nothing to do

I BEEN saying that!!